“I arrived in Potsdam as a tourist. The tourist information office, with its array of brochures, presented an impressive picture to the outsider of this, once, extraordinary city now 5 years after the unification of Germany. As an artist, invited to make an urban site-based piece of work, I was guided through the city by chance impressions and meetings.

My first most striking impression was the extensive amount of building work everywhere, together with the immaculate care for detail in restoring the old city centre buildings. Similarly striking were the visible remains of aggressive eviction procedures in the city centre – charcoaled walls, angry graffiti, incensed notices in many of the semi-derelict buildings, until recently a home to a vibrant alternative scene. At the same time the sovereign, almost divine, presence of Schloss Sanssouci, once a symbol of European enlightenment, could be felt looming in the background; an icon of the infinite backdropping immense, and for some formidable, social and political changes happening in Potsdam. The city seemed to be relentlessly reclaiming its past and, in many respects too, denying its presence. This year Potsdam is also to be instated as the capital city of the state of Brandenburg. 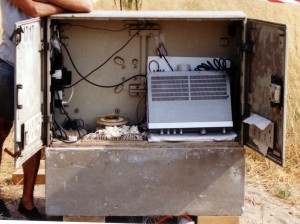 My walk took me through the ‘Schloß Sanssouci’ gardens where, just off the beaten path, one suggested by the tourist brochures, I stumbled across a harvested sunflower field. The dried stems of cut down flowers were reaching out of the ground, like violins from an orchestra pit; something was coming from this ground, which needed voice. 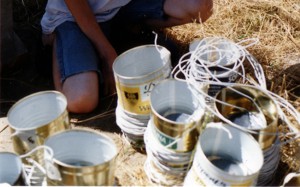 A 1000 m2 plot was chosen, cordoned off with building site tape, a distribution box, donated by the city’s electricity board, was placed at one end of it and a notice of proposed building work erected. My site was attacked twice during the three-week working period, probably by protesters.

36 loudspeakers, in large resonating tins were evenly distributed and buried just under the surface of the field, covered with mesh and hidden from sight. These have been wired up to a switch designed to relay, sporadically, the music to one speaker at a time, for a second only. The switch, a cassette player playing J. S. Bach’s Brandenburg Concerto, and an amplifier were put into the distribution box. On the day of the opening of ‘kunst im Stadtraum’, the site was opened to the public. The music has been programmed to play during official working hours, 7:00 – 13:00 and 15:00 – 22:00, with a morning and afternoon break of 20 mins, for three weeks.”

Statement to the press, August 1995

After the three weeks the installation was dismantled. Three loudspeakers were left buried, as potential archaeological finds.